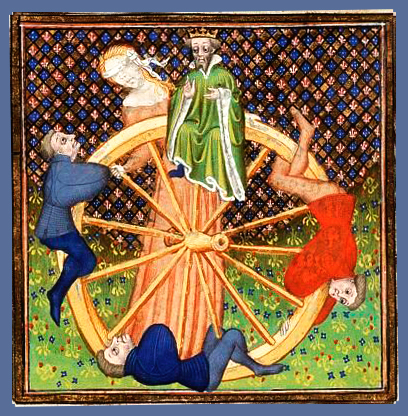 Our idea that there is a cycle to life has been expressed in many ways, ranging from the funereal “ashes to ashes, dust to dust” to the more colloquial “what goes around, comes around.”  This view is by no means recent, and seen to the medieval mind, fate was seen as a tremendous wheel, rotating through joys and sorrows, godliness and sin. Carl Orff uses this ‘wheel of fortune’ motif as the basis for one of his best known and most frequently performed works, Carmina Burana of 1937.

In 1803, a collection of medieval poetry was rediscovered in the Benediktbeuren Catholic monastery in upper Bavaria. The manuscript had been locked away for more than 500 years, in a cabinet also used to store Protestant and other ‘forbidden’ works. The poetry had been suppressed partly because of its secular nature, and partly because of its authors: the 200 poems were the work of vagabond poets known as goliards.

Goliards were itinerant scholars, frocked and defrocked priests, monks and students, who roamed from court to court and town to town. The poems, in various languages, ranged from religious odes to ferocious satires of sins such as lust, gluttony, and drunkenness. Some poems discussed the gods of Greece and Rome, while others detailed the pleasures of physical love. As one scholar has put it, the poetry embraced “church, state, society, and the individual.”

Orff chose 23 of the poems and structured them into a cycle, eliminating some lines of the text and dividing one of the poems up into two songs. Carmina Burana made its debut 80 years ago, on June 8, 1937, and met with immediate and resounding success. Soon afterwards, Orff wrote to his publisher, saying, “Everything I have written to date, and which you have, unfortunately, printed, can be destroyed. With Carmina Burana, my collected works begin.”